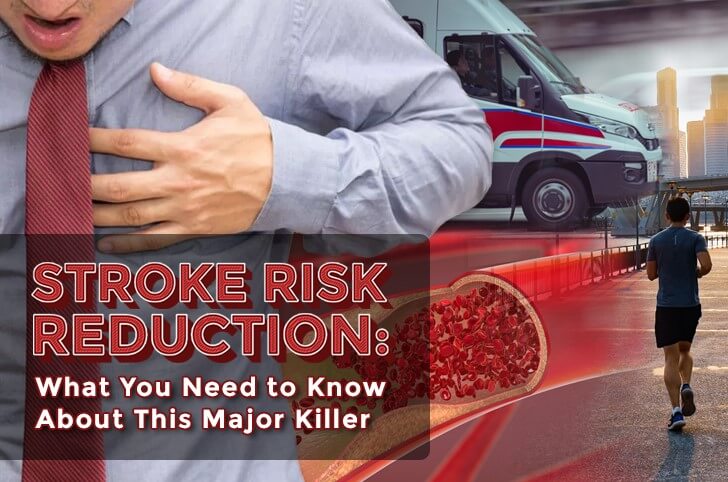 Cardiovascular diseases (CVDs) kills 17.9 million people each year, accounting for 31% of all deaths worldwide. More than 85% of these CVD deaths are caused by strokes and heart attacks. This makes it the world’s leading cause of death. The numbers are alarming, to say the least, and they keep growing every day, making CVD one of the biggest health concerns for the World Health Organization (WHO).

According to research, hypertension increases a person’s risk for a heart attack or stroke about 2x and 3 x respectively. More than 1.13 billion people around the world are diagnosed with hypertension. Another disheartening reality is that only one in five people diagnosed with hypertension has it under control. Individuals who survived myocardial infarction or heart attack are also at a greater risk of getting a stroke, especially without proper intervention. Both stroke and heart attack have similar risk factors including elevated blood pressure, glucose, and lipid levels. Defining stroke: A closer look at the global epidemic

To counter this global epidemic, in this year’s World Hypertension Day, WHO urged the public to “Know Your Numbers” by getting yourself diagnosed and intervening early, by adopting a healthy lifestyle, and staying on treatment as prescribed.

Stroke or “brain attack” occurs when blood flow to an area of the brain is cut off. This causes brain cells to be deprived of oxygen and die. Stroke can happen to anyone at any time, which is why some medical professionals call it “the silent killer” because it may or may not come with some warnings. Stroke can also cause permanent memory loss, speech impairment, and disability or paralysis.

There are two types of stroke: hemorrhagic and ischemic stroke.

Accounting for 87% of all strokes, ischemic stroke is primarily caused by a clot that blocks the artery that carries blood to the brain. Since the brain depends on blood from the lungs and heart to nourish it, reduced blood flow (ischemia) affects its function and causes brain cells to eventually die. Therefore, immediate medical treatment is needed before brain damage becomes irreversible.

A lesser common type of stroke, hemorrhagic stroke only accounts for 15% of all strokes, but it is also the cause of more than 40% of all stroke deaths. The cause of hemorrhagic stroke is a weakened blood vessel that ruptures and bleeds into the brain. If not detected right away, this bleeding will accumulate and cause compression of the brain tissue, which triggers the attack.

It’s also very important to learn about transient ischemic attack (TIA), which happens when blood flow to the brain stops for a short amount of time. When this happens, an individual may experience stroke-like symptoms that usually last within 24 hours. While TIAs are temporary and not as damaging as stroke, they can be a warning sign that an impending stroke could happen anytime, and medical intervention should be initiated right away.

A stroke strikes in moments, but it may take months or years to develop and it is the result of different risk factors that make an individual more prone to getting an attack. High blood pressure is the primary cause of stroke in most people, but it is also the most significant risk factor that you can control. With early detection, hypertension can be managed successfully, which is why it’s very important to have yourself checked regularly, whether you are experiencing any symptoms or not.

The nicotine and carbon dioxide in cigarettes can easily damage the blood vessels, elevate blood pressure, and increase an individual’s risk for having a stroke.

When large amount of cholesterol builds up in the blood vessels, it causes clots that can easily lead to ischemic stroke.

Excess body weight has been linked to an increased risk for high blood pressure and diabetes, which are predisposing factors to heart disease and stroke. Experts say that losing as little as five pounds can already help reduce your risks of getting a stroke.

Atrial fibrillation is a heart electrical condition where an individual’s heartbeat becomes irregular.  If left untreated, this will cause blood to collect in the heart and travel to the brain, which leads to a stroke.

Sleep apnea or the temporary interruption or cessation of breathing during sleep has been found to increase the risk of getting a stroke. A study suggests that sleep apnea causes the brain to be deprived of oxygen. When this persists, the nervous system releases stress hormones that elevate blood pressure and increase heart rate, which could easily lead to a stroke if not addressed right away.

Studies have revealed that certain blood disorders, such as sickle cell anemia, can increase the risk of a stroke. This genetic disorder affecting mostly African American and Hispanic children reduces the oxygen being carried to the body’s organs. Sickled cells also tend to stick to blood vessel walls that can lead to blockage and eventually stroke.

Excess alcohol consumption and drug abuse have been linked to stroke because of how they contribute to several medical conditions that are also risk factors for stroke including hypertension, diabetes, atrial fibrillation, and obesity.

One’s risk for getting a stroke increases as you age primarily because of the medical conditions that you may acquire as you grow older. The incidence of stroke is higher in men than in women in all age classes, and women are, on average, several years older than men when they suffer their first stroke.

The prevalence of stroke is higher among men up to the age of approximately 80 years, after which it becomes higher in women. Younger women (aged 34 years and younger) are more predisposed than younger men. Women who take birth control pills are at a higher risk for the condition.

Functional outcomes and quality of life after stroke are consistently poorer in women, despite adjustment for baseline differences in age, pre-stroke function, and comorbidities. About 800,000 strokes that occur each year are recurring events, which means that those who have survived a previous stroke have a higher risk for recurrence.

Stroke may be the fifth leading cause of death in the United States, but it is also highly preventable. And the most efficient way to tackle this medical condition is to address the risk factors that lead to it.

Following a healthy diet doesn’t only reduce your risk for getting a stroke, but it also improves your overall health. According to the 2015-2020 US Dietary Guidelines, a healthy eating habit should include consuming a variety of vegetables from all subgroups, whole fruits, whole grains, fat-free dairy, oils, and protein-rich foods like lean meat and seafood.

A recent study revealed that individuals who exercise at least five times a week are less likely to suffer from a stroke. Therefore, physical activity combined with a healthy diet is highly recommended by medical practitioners to prevent stroke. According to the Physical Activity Guidelines created by the Center for Disease Control, an individual should have at least 150 minutes of moderate activity per week or 75 minutes of vigorous activity per week. Since hypertension is the number one cause of stroke, controlling blood pressure levels can make you less prone to getting a stroke. It is said that people who have elevated blood pressure levels are 1½ to 2 times more likely to have a stroke than those with normal BP. Aside from a healthy diet and exercising regularly, it’s also very important to take your medications religiously and see your doctor regularly.

At the end of the day, preventing stroke is about adapting a better lifestyle. While there are many risks that can make you prone to having a stroke, embracing the right habits will help you live a long, happy, and stroke-free life. Should you be diagnosed with medical conditions that make you predisposed to stroke, you can always follow your treatment plan promptly and commit to following your doctor’s recommendations to ensure that you get a good prognosis from your condition.