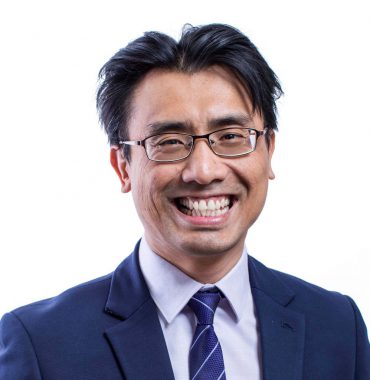 Dr Choo graduated from the University of Aberdeen, UK in 1998 and went on to obtain his postgraduate internal medicine training qualification from the Royal College of Physicians in London in 2002. He completed his clinical oncology specialist training in 2007 in Birmingham, UK, and is a Fellow of the UK Royal College of Radiologists. He joined the Academy of Medicine Singapore as a Fellow in 2013 and is currently the Chairman of the Chapter of Radiation Oncology. Dr Choo was the 2011 treasurer of the Singapore Society of Oncology and an Assistant Professor in Medicine at the Yong Loo Lin School of Medicine, National University of Singapore, from 2011-2018.

His practice includes radiation therapy technologies, precision medicine and the treatment of breast, gynaecological, head and neck, skin and sarcoma cancers. Dr Choo is skilled in the use of IMRT, IGRT, VMAT, RapidArc, SBRT and SRS in treating cancers. He helped set up MRI-based cervical interstitial and intracavity brachytherapy during his tenure at National University Hospital from 2009-2018, and has taught at various postgraduate teaching courses within the region.

Dr Choo was the principal investigator in three cervical cancer clinical and translational trials and a co-investigator in nine others. As part of these trials, he successfully obtained grants from the National Cancer Institute Singapore, Terry Fox and the New Investigator Grant from the National Medical Research Council Singapore. He has published over 25 peer review articles in medical journals and wrote the chapter on clinical research in the Encyclopaedia of Radiation Oncology. He speaks regularly at local, regional and international meetings.

Dr Choo has a strong commitment to patient care from diagnosis to treatment and beyond. In 2010, he established the NCIS Nasopharyngeal Cancer Patient Support Group, of which he was the medical advisor, and started the Befriender’s peer-to-peer supportive service. In 2016, he founded the Singapore Sarcoma Support Group and acted as the medical advisor. He organises yearly public forums to raise cancer awareness and was awarded the Singapore Patient Advocate Award in 2016 for his work in patient supportive services. In 2017, He founded the Dream Maker initiative to grant wishes to the terminally ill.  In 2018, he received an accolade in the Healthcare Humanity award from the President of Singapore with an honourable mention.

He can converse in English, Malay, Bahasa Indonesia, Mandarin, Cantonese and Hakka.